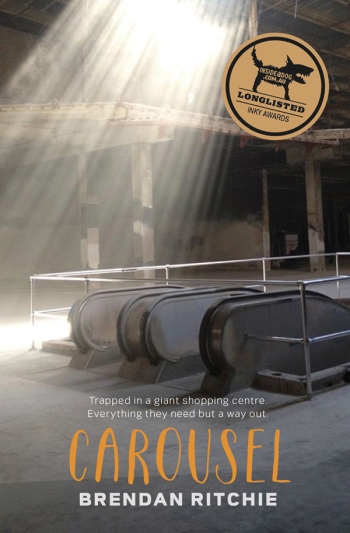 I loved this spooky, quirky, thoughtful book! ‘Carousel’ by Brendan Ritchie has been on my TBR list for simply ages (please don’t ask me how long my very-long-list is!) so I jumped at the opportunity to grab it from my library.

Firstly, because it’s set in my closest too-enormous shopping centre, one of my least favourite places to be. Imagine being stuck in there <comical grimace>. I was intrigued how the book would play out.

Secondly, and most superly importantly, I wanted to read it because of a dream I used to have when I was a kid. All. The. Time. I was the only one locked up in a shop after hours. And it used to start out as such an awesome dream, with me finding all the lollies. Until it would always, without fail, turn spooky. Something else would be in there with me.

Cue the ‘Carousel’ toilet gnomes, people. When I read about them, I came to the realisation I might never ever shop at Carousel again… 🙂 Seriously, if I could choose ANYTHING to try and make huge empty toilet blocks less scary, it would not be garden gnomes with their little faces watching out of the shadows… <shudder>

‘Carousel’ is a clever study of character and humanity. How do you survive for so long in something so big and artificial? How do you manage to live with so few other people, day after day? I loved the tactical food policies the characters have in place to keep healthy. The sinister light patterns. The idea of dragging your favourite bed from one store into the bookstore – because, why the heck not?

“… there was something sinister about the owner of the small hatchback parked below. All of us had felt it. The way they had parked the car across two bays. As if well aware that the centre was, or would remain, empty. If this person had been here since the first day then they were actively hiding from us, or dead.”

Ritchie plays well with the timeline. I was initially surprised, after the first two chapters, to find Chapter 3 jumped forward seven months. But it makes so much sense. This is a story about survival, tenacity and adaptation, and there’s little of that in those first months of juxtaposed bounty and rot. So Ritchie jumps to when they’ve learned their lessons, accepted they’re stuck for a while, and started to go a little stir-crazy. And run low on some things too.

The representation of the change in the characters, especially MC Nox, through what they wear and do – when one can wear and do pretty much anything except escape – is clever. And the twist? At the end? With the you-know-whats that have been left hidden there the whole time? Making you realise that outside is far spookier than you ever imagined? Making you massively change your picture of what drove one character? OMG. Clever.

I’m in the midst of edits at the moment, so this is a uber-quick review. It comes with a big thumbs up from me!

So… head out and read it… and remember to never, ever, ever, move the gnomes!