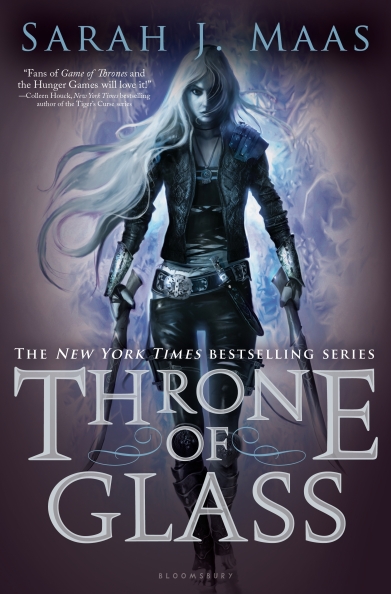 The hype is everywhere. There’s not a YA bestseller list that doesn’t seem to have at least two books with the name Sarah J. Maas next to them. I had to investigate.

And I like to start at the beginning, look at the book that began the phenomenon.

I picked it up with two parts excitement, one part expectation, and a dusting of cynic.

Hoping for a great read.

And, phew, I got it. This is a fab book. So fab, I didn’t want to just attribute its awesomeness to world-building or characters or clever writing. Because there was something else. Something more.

So after I’d read it once, I didn’t just reread it – I plotted out the entire book. What did I find?

Maths and murder – how Maas uses death to keep us hooked

No joke. I plotted each time Champions got their insides and brains eaten by an unknown-other-worldly-evil creature, and they die in an exponential pattern. No wonder I felt like the stakes just kept on getting higher.

Don’t believe me? Check it out. 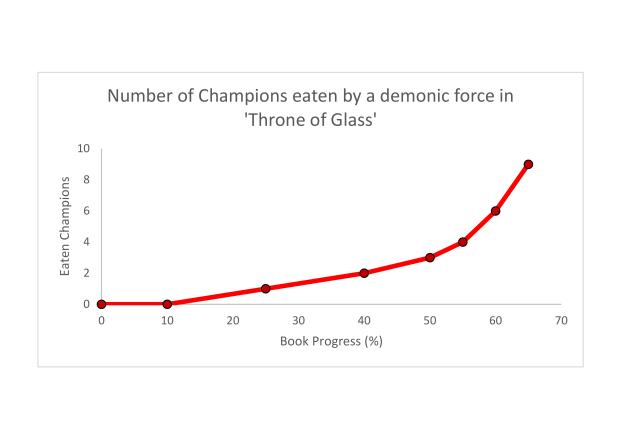 I rest my case.

Until the 45% mark, we think this whole thing is just a tournament with side-serve of magic and intrigue. It’s only there, just before halfway, that Maas lets us know there is far more at stake. And promptly kills a few more Champions, letting Calaena understand more about how they died each time.

And see how the Champions stop being eaten at the 65% mark? That’s when the third act starts. After that, we don’t need dead people.

We have Celaena, fighting and proactive and ultra-awesome.

Arcs all over the place

It’s refreshing to read a book with two strong female characters – both Celaena and Nehemia are active and heroic.

The most passive character is Prince Dorian, who spends most of the book reacting, static. Only at the end do we really see his strength begin to show through. It’s a tantalising invitation to read the next book.

Lover-boy #2, Chaol – the one Celaena has the more visceral connection to – is active too. He arcs from despising her and what she’s done, to trusting her, understanding her, caring for her. And running the dark-infused back-stabbing Cain through with his sword to save her.

With Chaol’s first kill, the last wall he built to differentiate himself and Celaena falls down. Nice.

Celaena herself starts as defeated, but refusing to yield. One of the sweetest starts I’ve read, we learn so much without ever feeling like we’re in a boring history lesson. Halfway through, she is still rather self-absorbed, hiding her identity, fighting herself. She falls even further by the 70%, when she’s sure her best friend, Nehemia, has been lying and is the source of the evil within the castle. But she’s kissing Dorian by 75%, hunting ridderaks at 80%, and regaining her friendship with Nehemia as well. Taking things into her control. Realising she cares for others.

And the stakes are so much higher.

The reason the third act is so strong is because Celaena is driving it. The deaths stop and everything hangs on what she can do. She’s helped. But it’s still her.

In terms of helping, it’s interesting that this book aligns with only two of the three rules for saving people that are outlined in the Better Novel Project. Celaena is saved by her Best Friend (Nehemia heals the ridderak bite). She is saved by a minor character (Elena drains the poison during the final duel). She’s even saved by a major character (Chaol and his first kill).

So we, the reader, know Celaena is special enough to save.

However, she should attempt to save a friend, and she doesn’t. She succeeds. Twice.

Twice she saves Nox, once with action on the climbing wall, once with words and truth when she advises him to run. It still works, we’ve already seen her weaknesses, what we need to see is her growing into her new strength. What we need to know is that despite her tough exterior and the fact she’s figuring out how to escape or kill someone everywhere she goes, deep down beneath the facade she cares enough to risk herself to save a friend.

Top notch read. An editing error that had me scratching my head (she’s already been down to the tomb, so why does she instantly presume the footsteps in the dust are someone else’s?), but I can ignore it because the book is so fresh. So addictive.

I’ve already read Book 2. Someone has #3 out on loan from my library.

Now I have to wait until it’s available…

I love my dog so much. She's so cheeky and snuggly and clever. That's it. That's the post.
This was a fab book that had my 9-year-old hooked, and I loved it too! Real science, awesome main character, great themes.
School is back and it's October and that can only mean one thing- NaNoWriMo is coming! Time to get serious about my prep. (Ummm ... It's past time maybe?)
Reviews like this make my day (week!) (actually probably my month 🥳).
Loved loved loved this show, it made me cry with joy and hope, it made me laugh. Amazing set, important message. Bravo Spare Parts Puppet Theatre!
It's a giveaway!! Head over to @yaforwa for the chance to win a copy of Evacuation Road 🥳🥳🥳
My first book baby is 2 years old! Happy birthday to The Lost Stone of SkyCity, my chilly mountain middle grade fantasy full of goats, magic and adventure.
A bird orchid. We were all so enchanted until my sister declared it looked like a man peeing and now I just can't look at it the same way ... 😂😂
I really enjoyed this book! It hit me in the feels on several occasions, and Kevin the dog is so lovely. It's got great themes around friendship, bullying, and dealing with change and disappointment. Plus, warm fuzzies abound (not all of them dogs!). The main character is autistic, so this would also be a good choice for autistic kids, or kids with autistic friends/siblings.